In common with many NME tours, in 2009 I deliberately chose not to watch one of the bands.

In previous years this had usually been an opening act which, in the case of The Coral, I would later regret, but when it was Starsailor and Coldplay I wouldn’t regret for a second.

One year I managed to miss everyone on the bill as when it came time to find the tickets for a show headlined by The Killers and also featuring The Futureheads, Bloc Party and the Kaiser Chiefs, they were nowhere to be found. An apologetic `I might have thrown that envelope out’ explained a lot.

I managed to miss Coldplay on the way up twice as I also had a ticket to see them co-headline a tour with one-album wonders Terris. When it was reported that Terris had cancelled for the show I had a ticket for, I didn’t go.

In 2009 it was Glasvegas topping the bill and I hadn’t been remotely enthused by their sub-Mary Chain efforts so got off early. 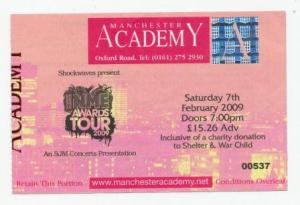 Much more entertaining – and the biggest reason for buying the ticket – were Friendly Fires who rattled out some energetic, indie-dance and looked set for bigger things.

But of course they, and everyone else on the bill, were quickly eclipsed by that year’s opener Florence and the Machine who went on to be a festival-bestriding colossus within about 12 months. Watching her here, I can’t say I saw it coming.

9 thoughts on “Know your NME”