This was a curiously entertaining day.

I’ll admit straight up – it wasn’t Neil Young that sold it for me. It was his backing band.

That was part of the curiosity.

Instead of Crazy Horse, Neil was being backed by the legendary Booker T and the MGs.

I’d grown up listening to Booker T – and the rest of the Stax catalogue – and the thought of seeing the great man and his equally illustrious cohorts, Donald `Duck’ Dunn and Steve Cropper was too good to pass up. 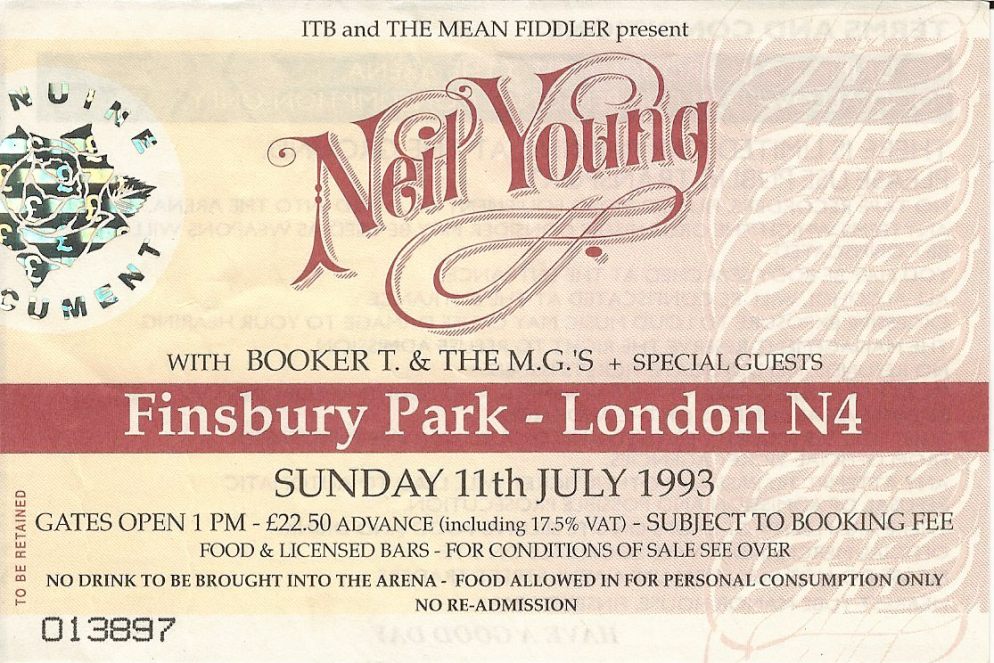 Young had recruited them following their stint as the house band at a Bob Dylan 30th anniversary concert special, and as much as seeing them in their own right, I wanted to see how these slick soul players would work alongside Neil’s idiosyncratic country rock.

Me, girlfriend Gill and mate Graham picked a coach up in Liverpool and quickly dubbed it the Marrakesh Express as it filled up with fumes and tunes.

We arrived at Finsbury Park barely in time to see anything of the openers, 4 Non Blondes, and settled in for the afternoon.

Following these one-hit wonders (although singer Linda Perry has done well since as a songwriter) were Teenage Fanclub, James and Pearl Jam – a line-up not to be sniffed at under any circumstances and, to be fair, these three had made it an easier sell to Gill who wasn’t overly keen on travelling 200 miles just to see Canada’s finest, nor did she share my enthusiasm for the MGs.

Of course seeing Pearl Jam in 1993 gave her the drop on our mutual friend Tony who is frequently mentioned in these pages and is a massive fan, but didn’t see them until a decade later and had to endure the frequent question `so have you not seen Pearl Jam then?’

The atmosphere in the Park had been pretty rowdy all afternoon – although never threatening – and it picked up another notch for the arrival of Neil Young.

It’s the only time I’ve seen him, so I’ve nothing to compare it with, but it’s fair to say he didn’t hold anything back.

Someone once described him as playing his guitar like he was digging up a road which I laughed out loud at but can see what they meant.

It was a performance like a hard day’s labour. Furiously committed and determined to wring every drop  out of every song.

And perhaps that’s why he chose Booker T and the MGs as his backing band – to be the coolly functional counterpoint to his righteous intensity.

Before the finish he threw in a cover of Otis Redding’s Sittin’ on the Dock of the Bay which was co-written by his on-stage bandmate Steve Cropper, and closed with a howling Rockin’ in the Free World on which he was joined by Pearl Jam and we were entertained by a lad who bounced around like Tigger throughout the whole song.