This ticket doesn’t illustrate one of them, but it does give me the chance to say that I can’t believe it’s been more than 30 years since I first saw Paul Simon.

And in just a few more months I’ll be seeing him again for what is reported as being the very last time as he’s bringing the curtain down on his touring career.

It will include a show in Manchester close to my own home town where he used to play the local folk club and, where legend has it, he penned Homeward Bound while waiting for the milk train to London after one of his Liverpool engagements.

This show (see ticket), I felt, wasn’t one of the best of his I’ve seen. He’s never been the most ebullient of performers and on this occasion I thought it was all a little dialled in. 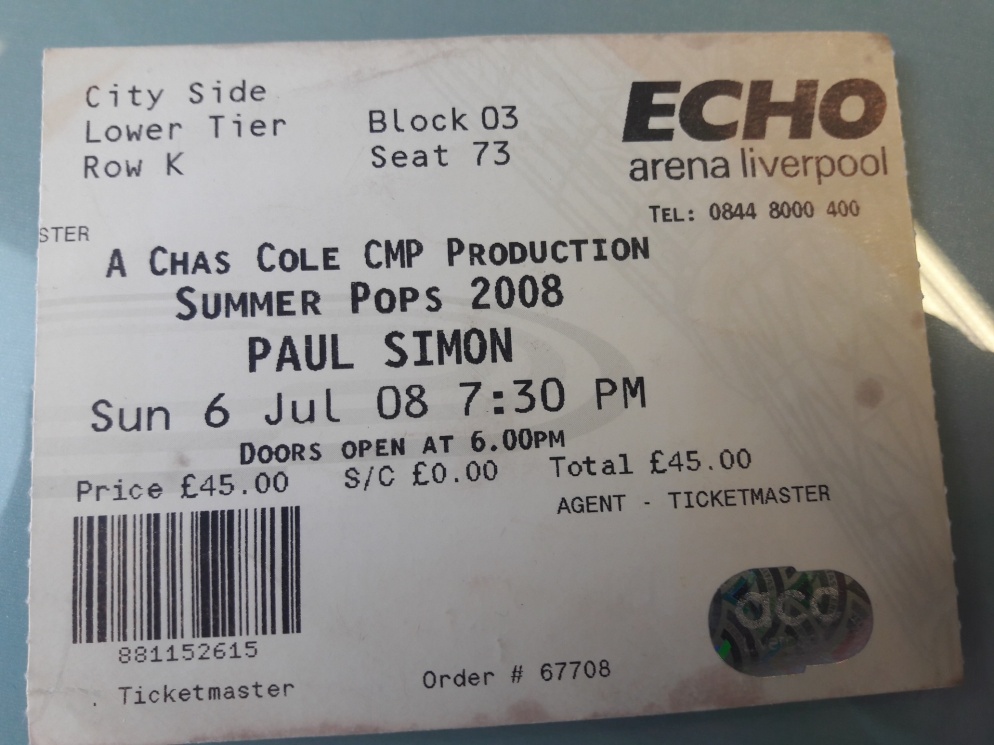 But on previous form he had been absolutely magnetic picking choice tunes from a songbook that’s probably the envy of all but a handful of songwriters.

I know it’s cheating to talk about occasions other than this one, but it was a privilege to see the Gracelands tour in 1987 when he brought along a stellar cast that included Hugh Masakela, Miriam Makeba and Ladysmith Black Mambazo.

What was disappointing was that on the occasions he left the stage to his African comrades, half the audience used it as an opportunity to head to the bar or the toilets. Staggering really.

The Summer Pops were a wonderful Liverpool institution when they were in a huge circus tent on the waterfront and brought in acts that were too big to play other venues in the city.

By the time the Arena was built and the Pops moved in for a little while, it was a bit pointless really as bigger acts could play the city as part of their regular touring schedule.

One thought on “He’s slip slidin’ away”