I was never a massive fan of The Verve. Haven’t been a fan of Richard Ashcroft solo. And once the initial rush around Urban Hymns had died down I wasn’t that big a fan of the album apart from the singles.

But yet there I was at a gig on the day that Bitter Sweet Symphony was released and all because my good friend Paul wouldn’t let up!

As I remember, this gig took place in the Manchester Academy 1 and I’ve seen tickets with that printed on it, so I presume it was originally scheduled for the smaller hall down the road but got shifted once the hype around their live return began to grow. 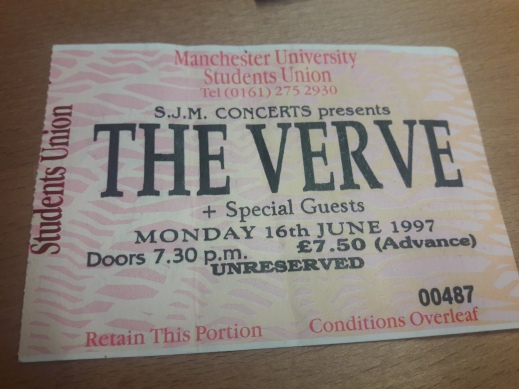 They had always seemed on the periphery up to this point. Promising but never quite delivering. But Paul never stopped believing and was determined a few of us would trek up to Manchester – getting our tickets early, hence the Student Union billing.

Paul is one of the great characters in my gig-going story even if I haven’t mentioned him so far. My favourite moments with him include sharing a beer with Kings of Convenience and their delight that we came from Widnes – ‘Like the Belle & Sebastian song!’ exclaimed Erland in reference to Stars of Track & Field.

Paul also frequently turned up at gigs with a gift for the band. Not especially something they would want, just something he felt they would like!

Anyway, it was clear something was in the air on this occasion as there was a real fervour awaiting the band when they appeared on stage  – quite out of kilter with what I considered to be their importance.

Clearly, for the next 12 months at least, they were something special and the aforementioned Bitter Sweet Symphony is a killer song even if it does borrow its hook, but I tired of Ashcroft’s rock messiah shtick pretty quickly.

The gig doesn’t really hold any lasting memories other than being the right place at the right time – and sometimes that’s all there is to it.

2 thoughts on “A little piece of History”