By many people’s reckoning, Radiohead have been the greatest British band of the last 25 years

Their body of work stands comparison with anyone else’s and they have at least one genuine masterpiece in their back catalogue in OK Computer – released in 1997 and which, along with that year’s Fat of the Land and Ladies and Gentlemen We Are Floating in Space, provided a blistering counterpoint to the fag end of Britpop.

Unfortunately I’d stopped liking them after The Bends and never bought into the OK Computer love-in at the time and subsequent releases didn’t bring me back into the fold.

Now, however, I fully appreciate the staggering scale of OK Computer and how worthy it is of its place in the British music pantheon.

So I consider myself extremely fortunate to have seen them tour on the back of OK Computer’s release for a show which was a light and sound overload of the kind very few bands can pull off. 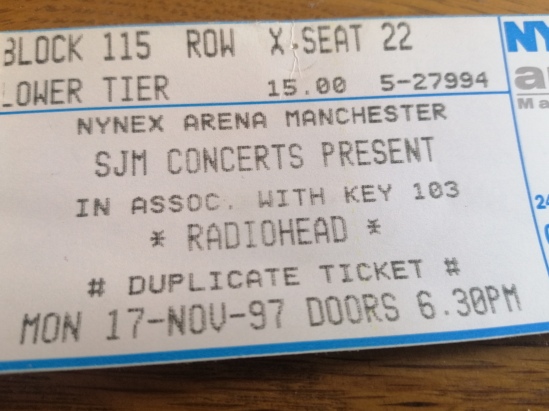 As you can see from the ticket, those of us who went were issued with duplicates as getting in proved to be anything but straightforward.

Me, regular Tony, other Paul and at least one other person who I now forget and apologise to went because Paul was a massive fan – still is – and he had secured four tickets from a guy in Birmingham who couldn’t go to what was a sell-out show.

In true Paul fashion he neglected to mention that he didn’t actually have the tickets, so when we arrived it wasn’t simply a case of picking them up.

Without the correct ID and being unable to contact the guy he’d bought them from meant the venue wouldn’t release them until the lights went down, finally believing Paul that the guy whose name he was quoting wasn’t coming and the seats would be empty.

Once inside we were treated to a staggeringly full-on performance that made you question the commitment of most other acts.

I’d go on to see them twice more, but on neither occasion would they summon up the almost elemental forces on display here.

In fact, at Glastonbury, the elements played a part in us walking away from their headline set midway through as Thom launched into another maudlin wail as the rain bucketed down. Los Lobos were a lot more fun that night.