There was the glorious headline set at Glastonbury which introduced the phrase ‘Rock n Roll Star, yeah?’ to mine and Gill’s frequently used lexicon.

Then there was the recently chronicled cancellation in support of REM at Huddersfield.

And by the end of the year they had set out on their own tour in support of (What’s the Story) Morning Glory? – a tour which had unmissable written all over it.

With my own car in one of its frequent spells off the road, four of us set off in Gill’s Mini for what was then known as the Nynex Arena in Manchester. Me, obvs, regular Tony, his girlfriend Melissa and her mate who spent most of the night looking gloomy – never found out why.

As an added bonus, support came from the fabulous Chemical Brothers who had released their debut album Exit Planet Dust in June of the same year and which I had used to soundtrack the summer. 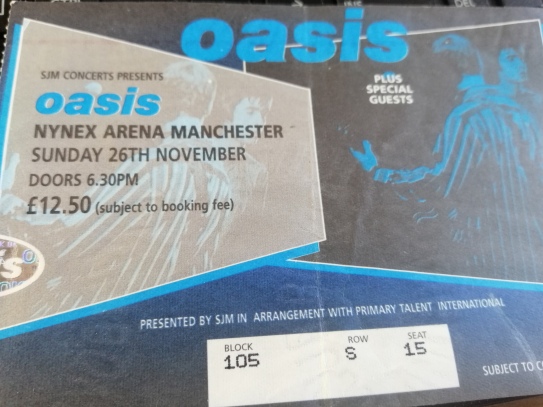 Following the Chems’ Big Beat battering we were ready for the main event and Oasis couldn’t really fail to deliver, choosing from what would prove to be their two best albums.

It proved to be the kind of night you never want to end and actually, looking back, represented a high point in many ways. They were still raw, rough and ready enough to be truly, genuinely exciting.

But, before long, they would get too big, too overblown and the number of killer tunes would drop with each album release.

In this show they gave us Cigarettes and Alcohol, Champagne Supernova, Supersonic, Shakermaker, Rock n Roll Star, Wonderwall, Live Forever and Don’t Look Back in Anger amongst others. They weren’t going to improve on that.

One thought on “Look back with clangour”